Son Gives it High Marks and Amazon Made it an Easy Purchase so Dad Liked it, Too!
By Don Kidwell
Son says he likes the game play of this Commander deck for it's ability to sacrifice cards and reanimate creatures at will, and since I was testing it out against him I'd have to agree it was a frustrating set to challenge when he's constantly drawing cards and bleeding off your life points directly. He also says it needs further tweaking since it's lacking board wipes and end game cards, but I'm certain once he returns to college after the holiday break he'll brain storm with his cohorts and add the necessary cards to, once again, make his opponents miserable. Very good buy!

* Winning. This is the most powerful of the five commander 2015 decks out of the box by far, hence the $40 price tag.
* Recycling. Eternal Witness and Skullwinder are your friends. Zombies are, in fact, ecologically friendly! Ignore all the clerical anti-zombie rhetoric.
* Throwing things. If you build a giant monster, then Jarad can throw it at your enemies. Just... don't try throwing the cards physically. It doesn't work.
* Infinity. Mazirek creates an infinite combo with any persist creature, such as Puppeteer Clique or Woodfall Primus, both of which are good cards in their own right.
* Tricking out your deck with really expensive cards. Fetchlands have *incredible* synergy with this deck since they count as "sacrificing permanents" when used, but they are expensive as heck. And once you have fetchlands, Sensei's Divining Top ($25-ish) is incredible. And... yeah, if you give a mouse a cookie. Such is Magic. Note that Jund Panorama is a budget "fetchland" that is playable in this deck. So is Bad River, though it's much worse.
* You like playing with cards named "Viscera Seer" or "Skullwinder."
* You like Lightning Greaves, which goes in any commander deck, costs $5 on its own, and is happily included in this deck.

* You want to say no to addictive substances (of which Magic: the Gathering is a particularly egregious example).
* You like saying "no" to everything your opponents do. Get a blue deck, or look up the "Stax" Commander archetype.
* You don't like having your deck shut down by random hate cards. Your opponents will get wise to you and play Rest in Peace, and you will be peaceful but very sad. Pack Reclamation Sage if this happens.
* You do not like the idea of killing your own hapless minions for value. Relax! Most of the minions you are sacrificing are plants, so you're basically making a salad. An EVIL salad.

Very powerful.
By L. Zwearcan
I played a similarly priced deck it was no contest. 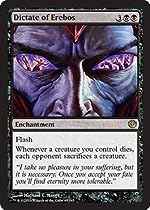