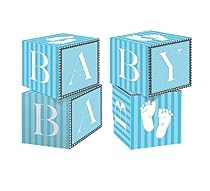 Adorable baby shower decoration!
By Aundrea
These blocks were perfect for our entry table at a little boy baby shower! We had a box where we had guests write their address on an envelope to enter to win a drawing (it makes “Thank you” cards so much easier for the new mom). Then we had these blocks, some rubber duckies and confetti. The blocks were easy to assemble and looked perfect. After the shower we folded them flat so we can pass them on to the next friend/family member who has to have a boy shower. I should note that the box has tabs on every side. It’s hard to describe, but instead of just a tab in the front when you fold the cardboard down, there’s one on each of the 3 sides. The makes it so the blocks form a more perfect box shape and the top doesn’t look opened at all on any of the sides. It also made it a little more difficult to flatten them after the shower, but it was well worth it.

Perfect centerpiece
By Kris
Easy to put together, great size. I bought both the blue and green so I could alternate colors. They were a hit. Everyone asked where I got them!