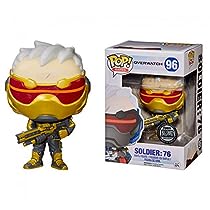 Get off his lawn! The superior Golden Soldier 76 has arrived!
By Peachy Fox
The original Soldier 76 is a bit difficult to get now since it was a Gamestop exclusive, so many may be wondering which one to buy. Honestly, they are mostly the same, however, this Gold Soldier has a superior paint job on the visor. The "glow" you see as a line in his visor was very dull in original Pop. Funko upped its game and actually made it brighter in the Gold version.

So as an avid collector of Overwatch Pops, my advice is if you are looking for rarity, go with the original Soldier. If you want an Overwatch Pop with a great paint design to show off, go with this Blizzard exclusive instead.