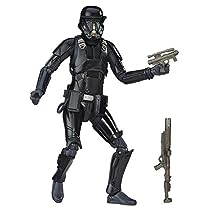 Availability: Usually ships in 24 hours Ships from and sold by Amazon.com
Product Description
Celebrate the moments of iconic action and relive the timeless adventures and from Star Wars: Rogue One with this premium 6-inch replica figure of an Imperial Death Trooper from Star Wars The Black Series. As the elite soldiers of Imperial Intelligence, Death Troopers are encased in specialized stormtrooper armor with a dark, ominous gleam. These soldiers serve as bodyguards and enforcers for Director Krennic, a highly placed officer within the Advanced Weapons Research division of the Empire. Outfitted with 2 signature blaster accessories, this 6-inch Imperial Death Trooper figure from The Black Series features premium deco across multiple points of articulation and quality realism for iconic role play and ultimate collectability. Protect strongholds of the Galactic Empire and build up an epic collection with this 6-inch Imperial Death Trooper and other figures and vehicles from Star Wars The Black Series, each sold separately. Star Wars products are produced by Hasbro under license from Lucasfilm Ltd. Hasbro and all related terms are trademarks of Hasbro.
Product Details
Product Features
Customer Reviews

Star Wars Black Series 6" Rogue One Death Trooper
By Graham Swearingen
I love Troopers, I love army building troopers and this is one of the coolest looking designs we've gotten for a trooper ever. I am a big Sandtrooper and Shadowtrooper fan and this new Death Trooper from Star Wars Rogue One is kind of a mash-up of the two. Luckily Amazon has this figure in stock at it's standard msrp so us poor folk can army build. Beware of scalpers buying all these up and driving the price through the roof, this figure shouldn't be more than $19.99. Though I'd say it's kinda worth more, it's really a fantastic figure.

If you've been collecting Star Wars Black Series figures you know what to expect in terms of articulation, some stiffer joints in places, some loose joints in places but overall really good. I thought the shoulder armor might hinder the figures articulation but the plastic is soft like vinyl so it can bend a bit and doesn't hinder it's articulation. The head has lots of range of motion and this figure can two hand hold the rifle no problem. Yes this figure is nearly 100% black so it's easy to assume it'd look plain, but there are actually silver highlights all over to accentuate armor clasps and things, I like the small bit of red on the rifle and the green visor and filter pieces on the helmet. I really, really like this figure. I think it's one of the best Black Series figures since Kanan and Ashoka from the last wave and all the way back to Han and Luke from Wave 1.

This figure is solid, it looks cool, its a bit of the old meets a bit of the new, this Death Trooper looks, well, deadly, I like this new style of loop holster for the pistol (always love figures that can holster weapons), and I like that both hands can hold either the rifle or pistol nicely. I'm getting more and more excited the closer to release date for Rogue One, and this Death Trooper is one of the coolest looking designs I've seen so far, fits in really nicely with the troopers we've gotten from the Black Series so far, can't wait to have a team of these suckers on display. This Death Trooper comes FULLY APPROVED.

Five Star Imperial Trooper!
By Mach V. Manuel
This Death Trooper definitely gets five stars! I'm not much of a 6" Star Wars collector, not that I'm not impressed by the Black Series, but I still prefer the 4" scale. This however, is a very worthy exception. Overall impressed with the figure. These new Death Troopers live up to their name, at least in appearance. We'll have to wait until the movie to find out just how bad to the bone they really are. The figure definitely captures their appearance pretty much perfectly. Very well detailed, very well articulated, and well, just all kinds of lean and mean.

Not much paint apps to speak of, but that's because not much is necessary. What little there is quite subtle and nicely done, no sloppy paint. There's even some minor paint details on the blaster rifle. And the gloss of the armor seems just about right. If I had one issue with the figure, it's that the loop on the blaster pistol holster/strap is sticking outward, which causes the blaster pistol to stick outward when holstered and not hang down naturally. It doesn't ruin the figure for me, but it does bug me a bit. Not sure if it's just on mine, or if they all happen to be like that. Otherwise, all in all, well worth it and a definite must have Imperial trooper (and a very worthy army builder figure too)!

One of the best Hasbro figures
By Anthony Hand
Despite being relatively new to collecting figures like this, I have been a model maker for more years than I care to mention here. As such, I can appreciate the efforts that Hasbro put into their Star Wars Black Series 6 inch line. They don't always hit high marks and their human figures can leave an awful lot to be desired. But, when it comes to figures in armour, they are spot on. If there is one thing you can say about the Star Wars films, they are triumphs of design and it looks like the new film is going to continue that trend, whether it turns out to be good or not. Hasbro have taken what's available to them with regards promotional material etc and pushed out a few figures early, before the December release of 'Rogue One' and this "Death Trooper" looks to be the most striking of them.

Clad entirely in a dull undersuit and polished black armour pieces, the Death Trooper (part of the Empire's intel units) is at once a huge presence, despite his rather lanky frame. This guy just ooze's cool and to be honest, he nearly stole the classic Stormtrooper's position as my favorite member of the Empire's military. However, the old familiar black and white Stormtrooper will probably be forever hard to beat, largely because they are so embedded in my memory. But, like the Stormtrooper - or any of the other Hasbro Empire troops - he is perfect for army building.

Standing at over 6 inches, the Death Trooper is highly articulated, but sadly lacking in double jointed elbows (which Hasbro's Stormtrooper has). His weaponry consists of a small hand held blaster and a more business like rifle. These are ok, but look a little toyish, if you know what I mean. They are also prone to warping quite badly. The figure's head is also non-removable, which means you cannot put a rank pauldron on him (from the Sandtroopers). That's a deliberate move by Hasbro which I didn't like. These are the reasons why this figure loses a star.

The only colour variation on the Death Trooper is a sliver belt buckle, a slight tonal shift in blacks and a vague greenish tint to his eye area and the two end pieces on his helmet. But, really, what you see is what you get here.

He doesn't sound like much, but looks fantastic on the shelf, which is all that really matters in the end right? Right. 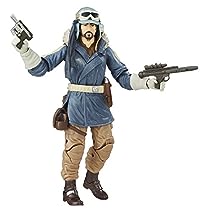