Availability: Usually ships in 24 hours Ships from and sold by Amazon.com
Product Description
What Is Loaded Questions Party All About?
Friends. Family. Random Strangers. It’s Party Time! Race around the board guessing which player wrote which answer while writing your own creative responses to 232 hilarious and highly loaded questions. With simple rules, no right or wrong answers, and exciting twists to the original game play, Loaded Questions Party is your answer to an epic and memorable game night!
For 4-6 Players / Ages 13-Adult
Let’s Say It’s Your Turn…
1) Pick the next card and read aloud the question matching the colored space you’re on. (Let’s say the question is “What is not a good housewarming present?)
2) All other players write a personal answer for the question on their answer sheets, which are then collected and read aloud by the player to your right.
3) After hearing all of the answers, choose your favorite and match which player wrote which answer. Advance one space for every answer you match correctly. The player who wrote your favorite answer advances two spaces. The first player to reach the WIN space wins the game!
Components Include:
Gameboard, 232 Loaded Questions, 32 Party Fouls/Favors, Answer Pad, Pencils, Game Pieces, Rules
Product Details
Product Features
Customer Reviews

Overall, good game.
By godsnmortals
Fun game - though be prepared to do some thinking. I purchased this game as a gift for my BIL's birthday. The idea was to add another game into the mix for the whole (adult) family to play while on vacation at the beach. We usually end up playing A LOT of apples to apples and had discussed trying out some new games - ergo, the introduction of Loaded Questions "party."

I'll start with the Pro(s):
-Comes with a board (board game)
-Cards have 4 questions on one allowing for less cards (less to keep up with)
-They include a rubber band w/ the mini pencils (I thought this was a cute touch - to keep them together when not in play)
-Most of the questions are great at triggering "oddball" responses - which is where the laughing comes in
-You get to write in your answer - not just pick the best one in your hand. For those with quick wit this is wonderful!

The Con(s):
-Game is limited to 4-6 players (even the "party" edition). If you have less you're sunk (cannot play). If you have more, they suggest partnering up into teams. This is what we had to do since we had 9 adults playing.
...Which then added another level of Con ... the game becomes really confusing and difficult to track once in pairs. The instructions do not go into detail re: pairs & when you hit on a card where there is a "party favor" or it's negative version (I forget what they called those) it does not address how you deal with them within the paired up situation. Some of those cared would give an unfair advantage or disadvantage depending on if you were applying on a player basis (as the game is set up) or a team basis. As far as the instructions were concerned, "pairs would take turns," take turns at what? Asking the questions? Picking favorite & matching who said what? (pretty much playing the game). So, each round one person from a pair sits out?? Our group did not want to play that way since the point of playing a game as a family is to have everyone actually play the game. This just led to a lot of groups discussing their favorite answer and matching answers to players.
-There is no time limit set to anything which can, if you do not set one yourself, string this game out and cause it to drag into the "not so much fun" category. (Make sure to set up a limit on how long people have to answer, pick their favorite, and do the matching)
-Requires use of board, answer sheets (a few are provided - at some point you will need to replace), and pencils.
-You have to watch to make sure the answer sheets do not become easily recognizable. One pair in our group had folded theirs at some point, so I had to fold all the other groups to match. Another group accidentally got a splotch of coffee on the back of theirs - wasn't as easy to have the rest match theirs. You get the point...
-The fill in the blank concept is wonderful for those with quick wit, or for those in a group where language is equal among the players. One of our players has English as her 4th language and she is still struggling with nuances, putting her at an unfair advantage.
-Most of the questions do not automatically elicit laughs - it will be up to the player's answers, so the funnier the answers, the better time you will have. (A few questions are funny on their own but most are tame and can be answered in like)

Overall it is a good game. I'm sure if your group is within the 4 to 6 players and everyone is great about answering quickly, with wit, you will enjoy yourself.

Loaded with laughs!
By mom, wife, chick
This was a gift for my daughter's friend. She took it to a sleepover party and they had a blast playing this all night! So much fun that she asked for her own when she got home. If you're not familiar, it's kind of like Apples to Apples, but you can fill in the blank with your own answer. The party version also includes a game board (which makes the game last longer). Lots of fun and laughs!

Fun for everyone.
By Jon
Loved this game-- super fun and like that it can be as clean/tame or as "adult" as the audience who is playing. We enjoy the game with everyone from our 10 year old niece to a room full of Marines having a buddies weekend. 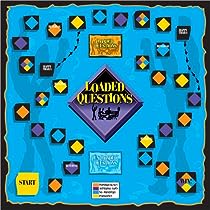 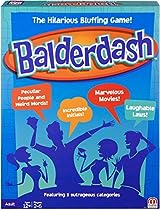