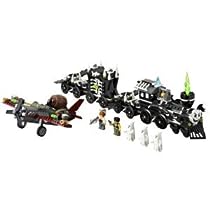 Availability: Usually ships in 24 hours Fulfilled by Amazon and Sold by Planet Fun Toys
Product Description
The Ghost Train is getting away with the moonstone. Help Frank Rock and Ann Lee catch it in their acrobatic airplane, suck up the ghosts with the vacuum weapon and grab the moonstone! Don't let them trap the heroes in the Ghost Train's prison! Includes 5 minifigures: Frank Rock, Ann Lee and 3 ghosts. Recommended Ages: 8 - 14 years
Product Details
Product Features
Customer Reviews

Awesomeness in a box
By CM Albert
This is a great set! My 6 year old son loves this series and this did not disappoint. The trains, bones & ghosts are aplenty, and the glow-in-the-dark features rock! My son loves the hoses on the plane, as well as the hanging chain so the heroes can swoop in and grab the moonstone. Thanks Lego! Now please bring on the coordinating DS and Wii game!

Great Toy
By C. Craddock
My 8-year old daughter saved up for months for this. It is pricey, as the larger Lego sets are, but she absolutely loves it. For her it was worth every penny. She has rebuilt the train several times and invited our next-door-neighbor, and fellow Legomaniac, over to build it with her. The glow-in-the-dark pieces are very fun as are all of the little details. Would be even better with tracks and a motor, but you can't have everything. :)

Very cool Lego
By Stacy Smith
My son wanted a Lego train- the $300 one, and I just could not spend that much on Lego's. So I bought this monster train. I like this monster theme Lego did- glowing ghosts funny vampires swamp things and wolfmen. It's very cool. So we got this train and when he opened it I was a little worried there's tons of pieces, but he just sat down and got to building this train. It is so much cooler than I thought, first off it comes with a plane. I guess I didn't notice or read that on the box, and then there's the train with 3 cars attached. One of the train cars has bat type wings that flap up and down and you pull it. It has certain glow in the dark elements and was a great addition to a few of our other monster pieces.